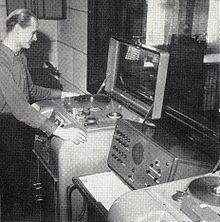 On the wave of resurrecting, remastering and rereleasing great moments of the avant-garde past, this is perhaps a mile-step for the history of Polish experimental music. The independent label Bôłt is releasing 3 cds in what is to be continued series of Polish Radio Experimental Studio. Founded in October 1957, only 9 years after Pierre Schaeffer’s studio in , 6 years after Studio fur Elektronische Musik in Koln, and 2 years after Studio di Fonologia Musicale in , and one year before (sic!) the now much cult BBC Radiophonic Workshop, PRES was a phenomenon on this side of the Iron Curtain, inspiring then founding of Új Zenei Stúdió in Zagreb and Elektronski Studio Radio Beograda. The moment was proper. Death of Stalin in 1953, and the Thaw made it possible to release the bounds on culture a bit, and its no accident PRES was founded at the same time as Warsaw Autumn (October 1956), the festival of contemporary music, which was the proverbial door to the rest of the world for the composers in this part of . Interestingly enough, PRES was supported by Radiokomitet, formerly in favor of socialist realism. The international fame was also proved by foreign composers, recording in PRES, such as Arne Nordheim or leaders of French avant-garde, Franco Evangelisti or François-Bernard Mâche.


Given the radio was also to produce TV and film soundtracks, it has become a place of meeting of musicians, engineers, visual artists, designers, architects, filmmakers, set designers, making it a true total work of art. The real founder and promoter of the Studio was musicologist Józef Patkowski, who was trying to attract the young generation of composers to the radio. Pierre Schaeffer, himself an engineer, believed that the new radiophonic medium will transform the experience of sound and will give an access to a new class of sounds: objets sonores, that will liberate music from its material roots. He was right: the new possibilities of creating music opened a whole new world to many engineers such as Eugeniusz Rudnik or Bohdan Mazurek of PRES, who turned into a full scale composers. 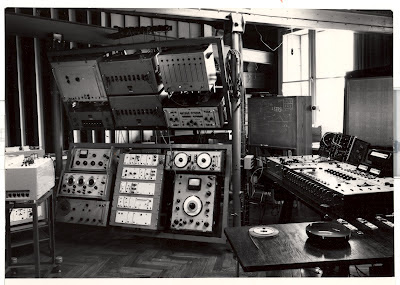 The liberation came also through the simplicity, aiming at the purity of the abstract visual arts of its time: first tune produced by studio was an Study for One Cymbal Stroke (for tape) by Włodzimierz Kotoński, recorded in 1959, consisting of a few minutes of Turkish cymbal with a soft medium-sized precission mallet. Source material was filtered into six frequency ranges and eventually 11 pitches. Here, the serial method of composition was transposed into the musique concrete: the original sound of a cymbal was filtered and then transposed into levels of sound, which were then layered onto each other. Quite differently, in Microstuctures by the same composer, the intro material for the further transformations were recordings of stroking the metal, wood or glass objects. This shows how very different were the approaches incorporated into the task of actual producing of music.


It didn’t restrict to that two, of course. Andrzej Dobrowolski’s Passacaglia was based on 5 percussion sounds transformed into 45 sound items, Rudnik’s Collage contained for instance a tragicomic sample capturing a voice of the Party functionary, announcing the “removal of the fish stock from the cold stores”, and Krzysztof Penderecki’s Psalmus was based on the element of a human voice. It is interesting, how the sonorists (Penderecki and Dobrowolski among them) was involved in both electronic and instrumental ways of making music.


The young founders of Bôłt not only went through the hours of the old recordings, but decided to test the studio’s output a few decades later by giving its reinterpretation to such remarkable European improvisers as John Tilbury (long time Polish scenes frequenter). Michal Libera, theoretician and free impro promoter in , is cooling the attractive image of brooding through the piles of old recordings in sotsrealist buildings. – Most of it I just had as mp3 at home. You have to have the patience to listen to hundreds of hours music, but then you find such pearls as Mazurek or Rudnik. It was epiphanic. The most idiosyncratic, unconventional, free music was made by sound engineers, not composers. Maybe it shows they’re not flexible enough with the mew media? – ponders Libera.

Also, importantly, they were still interested in producing scores, taking the challenge of the versatile music material itself, that didnt have so much to do with the contemporary schools of music, like Elektronische/Serielle idiom of Stockhausen and Darmstadt school or Schaeffer's dictum. Shaeffer wanted to put the listener into a new situation of listening, and this fact is only complicated by the task Libera given to Zeitkratzer. The possibilities of transposing electroacustic pieces to the amplified instruments seems to have extraordinary possibilities. The fact the PRES composers didn’t have the technical means to realize their ideas, as Reinhold Friedl of Zeitkratzer says, made them to look for other solutions.


In the UK they can obviously be linked with the BBC Radiophonic Workshop and indeed it is one of the kinds of artistic expression, that unites, not divides the East and the West in the cold war era. Composers were aware of each other's output, which was possible precisely because of the mutual great narrative, provided by the cold war. Also, a few years ago Simon Reynolds in the Inner Sleeve column in The Wire wrote on the Electronic Panorama LP which contained many of our heroes like Kotoński, Dobrowolski, Penderecki among thier foreign colleagues, again, seeing them as one and the same phenomenon, sadly not mentioning Polish composers in specific. I think while BBCRW composers were clearly interested in popularising concrete music (which lead to producing such gems as the still electryfying theme to Doctor Who by, among others, Delia Derbyshire - basically, a piece of musique concrete for the popular public, Tomorrow's World and The Hitchhiker's Guide to Galaxy), PRES authors still saw themselves as composers in relation to classic notions of music, composition, form etc and avant-gardism of the early 20th century. Perhaps it has also to do with the fact there 'popular culture', in the Western sense at least, didn't exist in the communist Poland as an expression of the rotten capitalist West. BBCRW was also very much associated with the popular idea of futurism: sci-fi books, comic and TV, cosmic exploration, other dimensions of reality, psychedelia, modern design and architecture - and the potential futures they was activating, futures available for me and you - but once again, they were inescapably futures under consumerism, full of goods that you may buy and have. Not so much in the People's Poland, although of course I'd be telling untruth if I said that Poland didnt have popular SF fiction, comic books and cinema:


The fact of living on this side of the curtain paradoxically helped PRES. Out of the three cds released by Bołt, the most up to date and attractive may be the one by Bohdan Mazurek, the only one, that contains solely the archive material. Mazurek is at the same time lyrical and exact, and still very original, even in the face of the revolutions of 60s and 70s, what makes his music so contemporary. Funnily enough, most of Poles know him unconsciously, because his pieces were used in popular TV children programs. But the interpretations on the PRES Revisited and Zeitkratzer Plays PRES take us back to the present day, showing that every music takes place in the present, and that music in general exists to be performed.
Posted by agata pyzik at 12:50