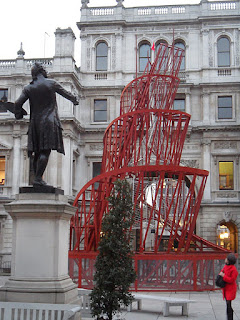 Seeing yet another replica of Tatlin's Tower on the courtyard of the Burlington House in London, done by Jeremy Dixon and partners, I thought the 'Russian avant garde', as we like to call it, couldn't be more disfigured and less properly interpreted than its original creators conceived it. Originally projected by committed Bolshevik Vladimir Tatlin, this 400 meter-high, steel and glass Monument to the 3rd Internationale, built to the glory of Komintern's growing success in the world popularisation of communism, has since the 1970s endured some kind of obsession with tiny, usually 1:40 or 1:50 replicas, built invariably as various exhibition's decoration. 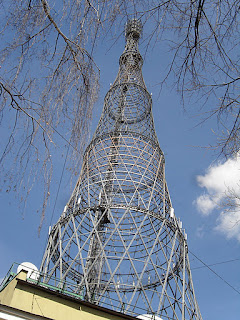 Tatlin's idea was indeed to surpass the benchmarks of western engineering, on one hand the ultimate example of Eiffel's Tower in Paris, on the other, New York and Chicago's skyscrapers. But with its projected neon, glimmering lights and its progressing movement in a whirlpool, twisting around its axis, depicting the infinite progress of socialism, sheltering at the same time a building inside, it was an ultimate tower, tower of towers, a Gesamtkunswerk of communism the way it never was. Designed in 1919,as a result of systematic replacing of the old Tsarist monuments with the new revolutionary ones, it was never to be actually built, an impossible projection of Communism's or anyone's technical possibilities really, becoming a prevailing tribute to the “Soviet Utopia”. 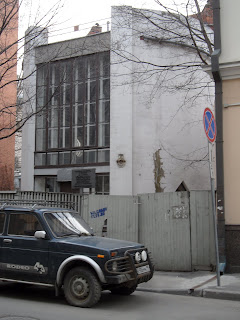 In the underdeveloped Soviet Union of the 1920s, the possibilities evoked by Constructivists remained largely a dream. Shows such as Building the Revolution. Soviet Art and Architecture 1915-1935 in Royal Academy remind us how our ambitions of building the new world are paltry in comparison to those now cherished as 'Russian avantgardists'. This internationalist group of agitators-engineers-radicals-propagandists were deeply devoted to serving the new Communist system from 1917. 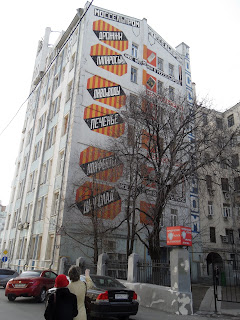 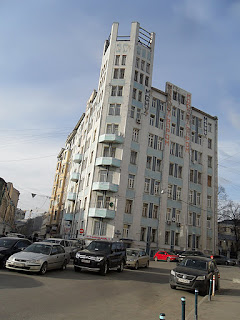 Lenin wasn't their fan, believing in the conservatism of the working classes, at the same time no one was stopping them from leaving the mark on the regime's visual shape – most obviously in the built environment. This was wide ranging. There were office blocks (like the outstanding Gosprom in Kharkiv, Soviet Ukraine capital, by Samuil Kravets, 1929), houses for communal life, cooperatives, schools, youth centres, factories and workers clubs, but also state communications, heralding the regime via radio (such as the beautiful Shabolovka radio tower in Moscow by Vladimir Shukhov, 1922), newspapers like Izviestia or Pravda and various Palaces for the press, or even the news stands designed by Gustav Klutsis, not even mentioning theatre and the arts. They were creating new ways of life from start to finish, and in the way the interiors were distributed, also new forms of work and social, family or sexual life. 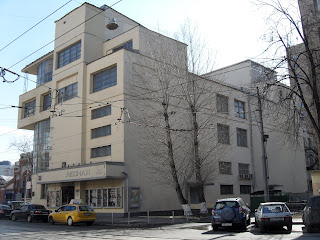 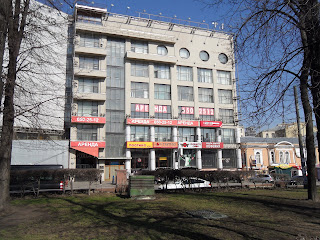 The show's focus on architecture’s importance shows how this art actually succeeded among other avant-garde activities under the communist regime. Even if the Constructivists themselves were not always architects, their approach to composition exposes a totally architectural approach to the world, which in their eyes becomes a fully mechanised, rectilinear, precise landscape on which industry put the final mark. Yet many of the featured architects were classicists both before and after the 1920s. They changed their course under Constructivist influence, and then, after the avant-garde's suppression by Stalin, they changed course again. The exhibition gives hints at this not necessarily strictly fanatically avant-gardist approach all the time, be it expressionist (like Soviet Doctor's Housing Cooperative by P.Aleshin in Kiev) or even semi-classicist, Palladian impulses (like Ivan Zholtovski's MoGES, a modernist power station with Renaissance arches). Also, the internationality of the style is visible in the Western import, most notably engaging giants like Le Corbusier (Tsentrosoyuz in Moscow) or Erich Mendelsohn (Red Banner Textile Factory in Petersburg). There was room for variety of styles within Constructivism, but perhaps this openness contributed to its subsequent demise, replaced by an architecture “Soviet in content, nationalist in form”. 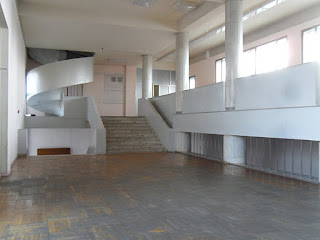 Whether killed during the purges, opportunists who gladly joined the new regime, or degraded to the insignificant roles like Melnikov, who ended up designing radiators, the Constructivists were in the end defeated by something perhaps inherent to the Russian character - a predilection to tsarist flamboyance and kitsch. They leave behind a group of buildings unmatched in their disciplined beauty, now largely decaying, as is shown throughout the show on the grandiose photographs by Richard Pare, who has been documenting their history for some years, also in support to Moscow's preservationist society to save what has left after Stalinist and post-soviet era. Namely, from Moscow's now ex-meyer Luzhkov and his business-minded likes, who has been vandalising the city for too long. For well known reasons, this period of Soviet history hasn't been incredibly popular among the post-Soviet satrapes and city councils.

Unsurprisingly, constructivists always had and still have now quite a lot of admirers in the West, who, inspired by them, launched a plethora of styles, from abstraction to pop-art and postmodernism. But when today we read the architectural manifestos of ManTownHuman or Patrik Schumacher, calling for a “new ambition architecture once had”, let's remember that Russian architects were responding to a revolutionary social demand, rather than realising their Ayn Randesque fantasies. 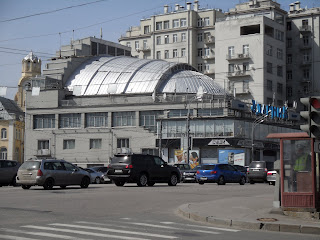