Boris Mikhailov: A Retrospective in Berlin

Only over the last twenty years Boris Mikhailov gained recognition in the Western art world. Without a doubt, the belated discovery of the 74-year-old Ukrainian photographer’s work has to do with the collapse of communism and its aftershock. This large-scale retrospective in Berlinische Galerie reaches back even further and reveals Mikhailov as an avid chronicler of both the pre- and post-Soviet eras by presenting works made between 1966 and 2011. His photographs from the last 10 years are devoted to street life in where he has lived since 2001. The 1990s saw the first publications on art from the Soviet Bloc with special issues often built on simplistic anti-communist praise; recent years have seen exhibitions mourning the perhaps too easily dismissed socialist order, after the brave new world of capitalism provoked unprecedented economical damage and societal degeneration.

Despite the broader historical perspective, the exhibition seemed weighed down by some ideological prejudices – albeit from the West. When we read in the catalogue, Berlinische Galerie director Thomas Köhler writing that ‘in the 1990s [Mikhailov’s] focus was existential, threatening. When the Soviet Union collapsed, he turned to those who had lost out in the social transformation, took their portraits and depicted them in their poverty and despair, the result of the merciless, repressive Soviet political system’, we see what theses Mikhailov is supposed to help in proving. This overlooks the blindingly obvious fact that the photos actually depict the effects of a merciless new capitalism on the post-Soviet poor.

In fact, the whole show challenges a view of the Soviet system, in which the monster is controlling every aspect of every citizen’s life, just as much as the condescending sympathy about those "repressed by socialism". This view is often followed by something like ‘but of course the bold Soviet people were capable of finding the ways out, there was also space for laughter, picnics, flirtation, sex and silliness’ or worse, by that ‘actually a little bit of ideology would be nice’, that for example some of the recent shows or books on the ex-communist countries often imply.

Mikhailov is some of the most prominent artists emerging out of the crashed Soviet Union, who basically continued what he was doing before the collapse, but without making his art in any way more tasteful or palatable for the foreigners. He was influenced by Russian conceptual art (Moscow Conceptualists, Collective Actions) and to a degree, sots-art, but evolved it in its own, sublime, and  documentary way. His attitude varies from a Czech New Wave little realism, not afraid of the abject and sarcasm, but still sweetly funny, and something much darker and visceral. He's also a well known erotomaniac and exhibitionist. when the nude pictures of his wife were found by the KGB, he was fired and decided to take up photography full time. 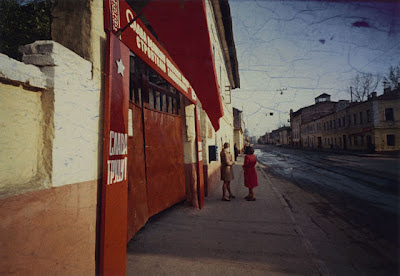 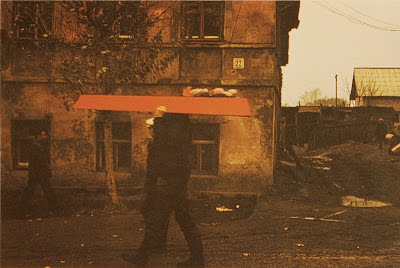 Then he made his first and incessantly stunning, Red series(1968-75). Mikhailov obsessively photographed red-coloured fragments: found on a girl’s knickers and in blood on her buttock, at a playground, on socks, trams or a babushka’s headscarf. He’s haunted, not so much by the colour of communist ideology, but by the ever changing world around him. It’s as if he believed that looking at something long enough might lead to the discovery of its molecular construction. On his photos the ideology is present in the micro- as well as the macro-image, like in the mass ornament, parades, flags, commemorations. Yet seeing only the ideology behind the colour would be akin to following the official party line; so much more is going on. Anyone looking for unhappiness under the regime couldn’t find the evidence in these completely unofficial photos. Crimean Snobbery (1982) – a monochrome rest after the brightness of Red, where the young and old, skinny and obese, enjoy the sensual pleasures of the seaside resort – could be seen as a parody of the propagandist Bloc newsreels explaining why we’re no worse than Saint-Tropez. But these images also offer an anthropological and behavioral inquiry, much like Black Archive, series compiled from 1968 until late 1970s, another series full of sexual mystique, made by an author simply fixated with the woman’s body. The leitmotiv of his art remains Mikhailov’s subjects: strangely exhibitionistic, open, giving him a large access to their privacy. We never know if they’re acquaintances, lovers or relatives. 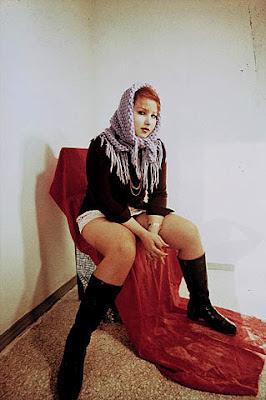 Regardless of the political system, Mikhailov has always refused to be a passive observer and kept on actively looking after 1991. The horrifying Case History (1997-99) and At Dusk (1993) series centre on the newly homeless and dispossessed around the ever appearing hometown Kharkov. They’re the biggest accusation of what happened after, not before 1991. It’s a complete collapse of any acceptable reality, of any limits of existence we could still call ‘humane’ (this word happens to be often applied to Mikhailov). The first are full format portraits of the homeless, presented in all their degeneration and disintegration. Extremely harsh, even too intimate in their frankness, they at least do not repeat condescending views on “the poor men and women”, but let them be just the way they want to be, grin, cry, showing their tattoos or genitals. At Dusk shows blue-suffused everyday scenes from Kharkiv: begging, lying with face on the street, dying. Cripples, drunks, old people, ill people. 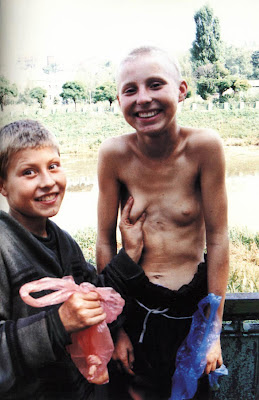 If I was a German…(1993) where the naked author, his wife and friends are playing scenes dressed as Nazis occupying a small Ukrainian village in kitschy, SM pornographic poses, comes as a relief, although a brief one: soon discomfort takes over. Mikhailov took his stay in Germany seriously, picking the most taboo fragment of its history; self-mockery and exhibitionism are a vital part of the series’ creepiness and power. Why are you looking at me looking so hideous and ridiculous, viewer? – asks its protagonist. Aestheticized, campy Nazi imagery is nothing new to the fashion photography and indeed, in keeping with the original portraits of the perfect Aryan bodies. David LaChapelles of this world, beware: horror can turn back onto you.
Posted by agata pyzik at 20:56 No comments: