The rise of the New Complicated 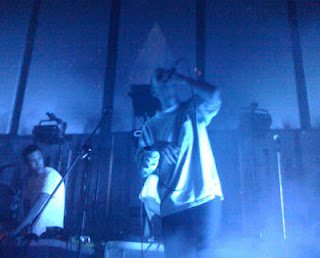 [review spiked from The Wire, written in September-October 2011]

With a growing stable of intriguing artists, Tri-Angle is the 4AD of the 2010s, in the times when the latter publishes artists like Iron & Wine, St. Vincent or . For some reason, the 00s were marked by a shift from multidimensional projects like This Mortal Coil swiftly replaced by tedious, repetitive mutations of singer-songwriter. We have a problem with defining authenticity, which for many people must invariably mean a guy with a guitar singing wistfully covers of Sufjan Stevens in a pub basement. At the same time, anything too spooky, kitschy or ridiculous or just too ‘serious’ was a faux pas. But not all is lost. Suddenly artists are not ashamed of strangeness or mysticism even. Dark spaces of the internets, anonymity of modern music making bear a strange resemblance to the gothic spirit. Those connections are explored in depth by a doctoral thesis by Mark ”k-punk” Fisher, Flatline Conctructs. Gothic Materialism and Cybernetic Theory Fiction, a 'Gothic Materialism' which has more in common with William S. Burroughs than Bram Stoker. Robin Carolan, the founder of Tri-Angle, consistently the spookiest of internet labels, who is not bothered by suspicion of kitsch - au contraire, pushing its esotericism to an extreme – at the same time is a fan of the lush sound of pop. What his artists, be it Balam Acab or How to Dress Well, have in common, is an interesting alternative to the default “poptimism” of chillwave, consistently penetrating grey areas.

The latest two: Water Borders, a duo of producers Amitai Heller and Loric Sih, and Ayshay’s Fatima Al Qiadiri, -raised and now a New Yorker are very intriguing exercises in this new mysticism. They show us how we actually consume music: if we’re accepting the exotic, it is only in a certain highly conventionalized form of ‘folklore’. Their music can be qualified as an experiment in modern ‘world’ music, having nothing to do with any cliché of it you previously knew. Ayshay relies solely on various transformations of Al Qiadiri’s voice: her singing acapella reinterpretations of the traditional Islamic hymns, but the way you never thought of the music. Filtered to degrees of complete unrecognisability, stripped bare of any instruments, that would make it Qiadiri’s voice resemble an old man, a child and a young woman at the same time, layered together in one piercing drone, with a tribal beat in the background. Is it real religious devotion or pop travesty and does it matter? Sounding so intimate, we feel like we interrupted the artist in some private religious ritual.

In turn, the full length from Water Borders is a richly packed experiment at marrying the gothic and the exotic, engaging rich layers of Gamelan and African drums and industrial sensitivity. There’s something very post-punk about the way the seemingly incongruous styles are mixed here – the nearest memory is that of bands like This Mortal Coil, Cocteau Twins, Current 93 or even Dead Can Dance (sic!). It reminds us how industrial, dressed in radical politics, was actually another mutation of gothic – and on Harbored Matras romantic, gothic and exotic exist on equal rights. Industrial shared the gothic's obsession with technology, moral and civilizational decay, sexuality, exoticism, and above all, transgression. It is "religious" both in the sense of the old flirtation with occultism and with the transcendent, otherwordly, spiritual, celestial... According to Jon Savage, investigation of "cults, wars, psychological techniques of persuasion, unusual murders (especially by children and psychopaths), forensic pathology, venerology, concentration camp behavior, the history of uniforms and insignia" and Aleister Crowley's magick was present in Throbbing Gristle, but we can apply that to many others. Then it's passed onto Joy Division and PiL, whose marriage of cold and visceral influenced both popular goth post punk like Bauhaus and 4AD artists.

The reason This Mortal Coil records aged so well is in the end an effect of sheer prettiness – it’s beautifully recorded, romantic and dreamy material, a timeless Goth seduction soundtrack. In its beauty, its ritualistic, watered, dubbed out aquatic qualities, and its rich imagery, Harbored Mantras may have a similar future - I can easily imagine a contemporary Goth lightening candles and playing Water Borders as a seduction record. While the now rarely mentioned artist Muslimgauze was a music ethnographer whose findings were to serve the fight for Palestinian Autonomy, Ayshay and Water Borders are clearly pop. Their goal is making beautifully recorded music with a timeless sound.

UPDATE: a few months after I wrote this review, Simon Reynolds has published a post on "the new exquisite", which was a confirmation of my intuitions that the New Complicated (to this I'd also count Julia Holter or Cold Cave) is being born somewhere in the intersection of seemingly incongrous contemporary musics and esthetics.
Posted by agata pyzik at 15:12 No comments: 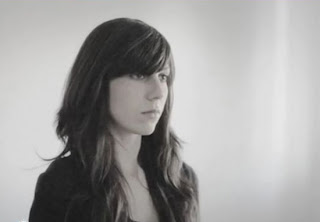 [longer version of a review first published in The Wire #338]

Not long ago Julia Holter smitten us with the enigmatic and eccentric Tragedy, one of those records you can’t predict until they happen, a samples and distortions-made vehicle for some really moving vulnerability. Now it turns out simultaneously with those tormented cantilenas she was working on a far sunnier record, though, fittingly with her Greek tragedy fascination, she called it Ekstasis. Well, don’t expect ecstasy in an…ecstatic, climactic way. It’s a rather playful and poppy record, where tremors and anxiety of Tragedy has been calmed by serenity. It is largely due to Holter’s fresh and girly soprano voice, which is far from operatic force, yet manages to express a palette of emotions. Main emotion here is bliss and a mature understanding, what bliss is. There’s nothing that seem to menace this sense of joy, even if, like on Marienbad or In the same room, it can assume at moments quite dramatic form. In the former, playing with her harpsichords and keyboards, she intuitively associated the jumbled construction of the Resnais’ film with the way she puts together fragments of different songs, some upbeat and percussive and some otherworldly and droney, which collapse into each other, just as layers of time and space, people and sculptures collided in the film. Holter displays here remarkable compositional talent and capacity with sound techniques, with virtuosic sound distortions, sampling, and lines of clear voice, which comes in and out. Mostly it’s difficult to work out what’s played and what’s sampled.

I can hear here both the vocal experiments of modern composition and of outré pop, from Salvatore Sciarrino to Laurie Anderson’s pranks with vocoder, but they never come out as second-fresh. It’s because Holter also has a feeling for pop, especially her native : think the Beach Boys' idea of multilayered pop and candy-like production, a sunny, but flawed Neverland; or Fennesz's Endless Summer - cheerful surf-pop broken with 21st century melancholy. But think also this Scandinavian melancholy cliché, Stina Nordenstam singing on the wind, who nevertheless took modern composition classes, or even "worse", this supposed queen of kitsch, Enya - the latter seem to have a huge, unannounced comeback, at least as an unlikely inspiration for many "good taste" records. It’s also a very dream-pop record, full of long beatless stretches, like the airy, spacey Boy on the Moon, where Harold Budd-like drones encompass Holter’s soprano. What is also intriguing in singer’s approach is her lack of flirtation, delicacy – although it also may limit her palette, because you can’t expect her to go all of a sudden Diamanda Galas or Karen Dalton. On the last track, This is Ekstasis, she puts layers of her voice with brusque drums, reminiscent of  Roxy Music’s Bogus Man, and the displaced random sounds of a saxophone (sic!). Ekstasis is full of such undermining moments, though free of the intentional kitsch that characterises so much contemporary production. 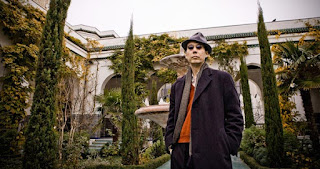 [longer version of a review first published in The Wire #338]


Eyvind Kang’s latest project and LP, The Narrow Garden, reaches for early French troubadour poetry or non-western poetry from Persia and Far East, which challenged a lot my training in modern Western poetry. We think metaphors are something to decipher, put into set of cultural references, and forget the contemplative & epiphanic meaning that poetry used to have in pre-modern times and which even someone so devoted to classic erudition as TS Eliot could still appreciate in religious, pre-romantic approaches of his favorite Dante & Cavalcanti. But given the circumstances, I’m sure the reception both Kang and Elodie wish for is non-academic. Elodie started this two-act gig in a completely packed Cafe Oto on the first night of snow this winter. It was organised as the first of a Stephen O’Malley-curated series, helping to promote two new works by some rarely seen musicians of the contemporary experimental scene. Such a chamber-like event demands absolute silence and focus, and one could feel the crowd, only seconds ago occupied by chat and gossip, melting minute by minute under the spell of Andrew Chalk’s tipping of the guitar and his Belgian collaborator Timo van Luyk’s flute. Their methods of effecting sound out of their instruments seem just as elusive and delicate as extremely modern in recalling 20th C avant-gardes – preparation, tipping and touching, suppressing the air in the van Luyk’s flute especially, so that shimmers and air flows are equal with the conventional “sound” itself, or even so that there was nothing such as an “orthodox” sound. The texture gets this way complicated in a way we didn’t predict – and the palette escapes any easy search for a melody or sound progression.


Chalk, immersed completely in the guitar, demonstrated some gripping focus on his instrument, with cymbal-like tapping, making shimmers, sounding like movements of the air as it was moving between the flute and the strings. In his review in The Wire 337, Nick Richardson aptly compares Elodie to Morton Feldman’s Rothko Chapel, in that both are sacrificed to contemplation of exquisite patterns of the smallest gestures, as if stroking glass, like glissandos of a harmonica. Their latest record is called La Lumière Parfumée – something as delicate as the sound they’re making, seemingly contained in repetitive arrangements, but in fact happening in the light equation between the two musicians, so well placed together that it seemed nothing could interrupt their mutual alchemy.


The second part of the evening brought the pitch-perfect soprano of Jessica Kenney together with Kang’s musicianship. It started with Kenney walking across the room, between the crowd, who parted to let her in, and Kang following, with her singing single high notes, as if she was examining or mapping the resonance of the place. With that gesture, one could feel they absorbed the whole space into their performance. Kang and Kenney resurrected the spirit of the early medieval music without sounding anything like ethnographers or some society of Early Music. I’m quite sure that we were closer to the originals because both are capable of ‘thinking’ troubadour or Eastern music spirit, and not just mechanically rendering them. The effect was stunning. Kenney has one of the most beautiful and at the same time non-intimidating voices I’ve ever heard: sweet, multifaceted, deep and youthful, capable of capturing all the drama of her Persian or Provençal masochistic lovers, unhappy widows and loners. Kang was her perfect partner, masterfully rendering melodies in various musical scales on violin, guitars, flute, charmingly multi-layered by delays, echoes and feedbacks, creating complex musical patterns, cantilenas, drones and polyphonies. It seemed even too pure and indeed this evening was a test asking whether we are still capable of listening, of experiencing something so delicate, of such unknown beauty, such incredible austerity, at times clinically cold, otherworldly and distant. Something that seems to have nothing to do with the way we live our lives now, but that seems to matter, here and now; that brings us back to ourselves, to our bored and tired bodies, refreshes and renews them and the spirit that inhabits them.