Sounding the Body Electric: Experiments in Art and Music in Eastern Europe 1957-1984

On the occassion of the opening in London, a review of Sounding the Body Electric show (adapted from a text published in The Wire, August 2012), which first debuted in the Lodz, Poland's Museum of Art in June-August 2012 and currently, though adapted for the new space, is available in Calvert 22 gallery in London, UK.


a newsreel about the Polish Radio Experimental Studio

There were many decisive dates in the history of the Cold War, but little mattered so much as 1956. It meant very different things in different countries: choice of Khrushev for the Communist Party secretary in brought the alleged ‘thaw’ in the Bloc. For workers’ protests brought to power a relatively popular reformed Communist regime; but for , a revolution that was quickly and brutally suppressed. It meant relief on the culture in , but in , it lead to a revolution against the Soviet government, that, after brutal suppression by Soviet tanks, brought more control, only less thinly veiled. For everyone it meant changes, and nowhere it was welcomed more enthusiastically than in . Politburo wanted to "repair" the damages it has done, and did it via science, experiment and lifting of the previous censorship. Basically, it tried to help its damaged image with culture. It was supporting various cultural initiatives impossible before, including promotion of abstract and experimental art, suddenly liberated of accusations of formalism and opening to the Western influence.

In music life the most important aspect was inauguration of the festival Warsaw Autumn, but first of all, founding of Polish Radio Experimental Studio (PRES) in 1957, answering the challenge of Schaeffer and Stockhausen with their respective studios for music experiment, Studio d'Essai in Paris (pioneering in effecting the musique concrete, which term was coined by Schaeffer) and WDR Cologne. The chamber, lushly arranged and superbly researched show Sounding the Body Electric 1956-1984, is located in Lodz – Polish Manchester, in the Art Museum co-founded by Constructivist pioneers Katarzyna Kobro and Wladyslaw Strzemiński. It was supervised by a renowned expert on Eastern European art David Crowley and Daniel Muzyczuk, and sees PRES as a chance to put together and explore the most intriguing experiments in the crossover between music and visual arts in the Bloc.

It was an era of developing cybernetic, electronic and information technologies. At the same time, the question of how the Bloc was actually forward or competitive to the West in terms of technology remains open. You could say that embracing technology was one of the ways of compensating the promises unfulfilled by the politics. On the other hand, artists could reconnect with traditions of artistic modernism, the first avant-garde, buried by Stalinism: hence the Neo-constructivism, comeback to the kinetic art, to light and sound experiments, cybernetics, computing, exploring of the electro-acoustic possibilities. The beautiful, moving, colorful, mechanized, industry-related art, just like the avant-garde before, was to create a new aesthetic, and then, new social relations. What is great is how the show, by meticulous choice of artworks and reconstructions allows us to experience, sometimes for the first time after 1989, the originality of post-war Soviet art.

Showered by state money, the Studio was designed by the most progressive artists of that era: architects, directors, musicians, engineers. The room was “mechanised”, with vertical panels, one side sound-absorbing, other sound-reflecting, painted in red and yellow, that changed colours according to the type of activity. It was designed by an architect Oskar Hansen, now considered a major influence of that era with his completely original idea of modernity, based on his concept of the Open Form (drawing from architecture, but surpassing it in all sorts of directions, and encompassing the whole world of social relations). Similar experiments in constructivist approach presented conceptual artist Alex Mlynárčik, with his collages of new Metropolis or composer Dubravko Detoni, with conceptual, kinetic artist Aleksander Srnec, who together authored a 1972 Proposal for a in , a monumental, glimmering, sound-emitting diagonal, evoking Tatlin’s Internationale monument in form and message. It’s an era of splendid collectives: Béla Balázs Studio for experimental film in Budapest, VNIITE All-Union Scientific Research Institute of Technical Aesthetics in Moscow or Prometheus Institute in Kazan, founded by Bulat Galeyev, developing Lev Theremin’s inventions with synaestesiac prophecies of Alexander Skriabin into electronic sound the name of the space race success – all this financed by Moscow money! 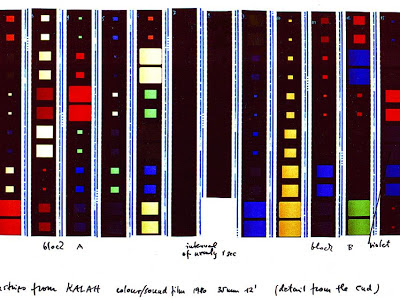 This is the era of utopianism and burgeoning conceptualism. So Boguslaw Schaeffer draws graphic scores to realise his idea of “Poliversional music” in PR I VIII series of potential “supra parameter” music, where all the elements, pitch, duration were variable. Yes, John Cage’s (and Fluxus/concrete poetry) influence on the whole generation of musicians (he visited in 1960s) is obvious, but Eastern artists looked everywhere: Mondrian and Malevich, happening, performance, also feminism (sexually fuelled films of the phenomenal, feminist artist Katalin Ladik!).

This is, for comparison, some feature film she played in, as she appeared in many TV and else rpoductions - not entirely sure what's going on in this one, but it's definitely sexy!

At the core were biomechanics and organicism, and a reflection over how a living body interacts with the environment. The Studio served recording of film and TV music during the day, and the tape leftovers were used by engineers, such as Boguslaw Mazurek or Eugeniusz Rudnik, who cut, pasted, reversed and manipulated it, pioneering the aesthetics of trash and plounderphonics. Musical and visual effects are stunning: published scores – because only a published score was considered music by the authorities - look like utopian architectural sketches for a futurist city. Synesthesia inspired architectural hybrids, as much as of new morphing interpretations of abstractionism.


The most stunning reconstruction is that of Teresa Kelm, Zygmunt Krauze and Henryk Morel’s Spatial-Musical Composition, six acoustic booths emitting different sounds and shining different colours of light – by walking, we shape the installation. Those knowing the Polish film new wave, will see how much Jan Lenica and Walerian Borowczyk (or early Polański) emerge straight from surrealism – the show opens with The House (1958) by those two, an oneiric animated film full of visual and acoustic objets trouves, generated by Wlodzimierz Kotoński. This elegant avant-gardism followed by years of flourishing experiment is closed unexpectedly, in less than a decade, when 1968 brings anti-Semitic crisis in and the Prague Spring in . Szablocs Esztényi and Krzysztof Wodiczko’s Bare Transmitters from 1969 with performers playing various, also forbidden stations is no longer a Cageian “chance” operation – rather a grim scene of oppression, a power-play, work of hope lost in art as the liberatory power.
Posted by agata pyzik at 12:26 2 comments: